Where we came from

Early church life in Crossfield consisted of a circuit-riding preacher leading worship in both McCool’s store and in homes. The cornerstone for a new Methodist church was laid on November 10, 1905.  This stone is an important exhibit in our sanctuary.

There was also a Presbyterian presence.  In 1916, nine years before the United Church was formed, Crossfield decided to operate as a “union” church.  In 1925, Crossfield officially became part of the newly amalgamated denomination of The United Church of Canada.

In November 1998, the Crossfield church was destroyed by fire. Construction began on the new church and on December 5, 1999 the first service was held in the beautiful home we occupy today.  The Madden United Church closed in March 2001 and the congregation amalgamated with Crossfield. 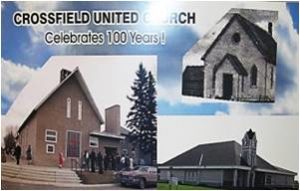 November 28, 1998.  The night that changed the lives of our church community. Our beloved home of 95 years was destroyed by a fire.  The janitor, Rob Estes,  at the time was in the building when the electrical fire broke out and swift action was taken to contain the fire and preserve as many symbolic items from the building as possible.  Members of the fire department, who were also members of the United church, were able to negotiate the fire and recovered a tapestry of the Lord’s Prayer, 1950 silver goblet, and a vintage bible.

Many of us still recall the night we stood on the street and watched the flames consume the building. Once the fire was extinguished, they were able to return to the rubble and recover the main chancel cross of 1958.  This cross of knotty pine once hung at the front of the sanctuary in the old church.  It was made by Walter a. Hurt in 1958 when renovations were made to the chancel.  It now hangs in the hall of the new building. 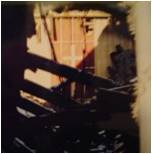 We all know that out of the fire comes rebirth.  Our chance had come to fulfill the dreams of many of us to build a new building began, which for 10 years, we had been trying to make a reality. As demolition began, members of the congregation began to search their memories for stories they had heard as a child regarding a cornerstone and capsule that had been laid when the church was first built.

This stone quarried just north of Crossfield formed part of the foundation of our old United Church, originally built as a methodist Church in 1905-06.  The Church was destroyed by fire November 28, 1998. The recovery of this stone and its contents was initiated by Mervin Fox who remembered his father Edward Fox had told him of attending a cornerstone laying ceremony at age 13 and that it housed a time capsule. The carved niche was found to contain a copy of the handbill announcing the cornerstone laying ceremony as well as a copy of the Christian Guardian dated October 25, 1905 and two Morning Albertan newspapers dated November 9th and 10th, 1905.  One other paper was found but was unreadable and badly deteriorated. 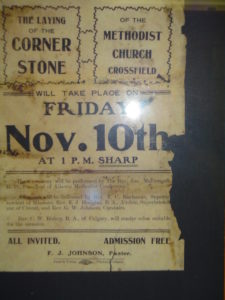 In the 1980’s, the congreation realized that our 1905 church was not going to last forever. Plans began with researching facilities to create a wishlist of features and possibilities for our new building.  Congregation members began a variety of fundraising efforts which included a fun-run, music tape and capital campaign to gather funds internally.  In 1994, the plans were put on hold.  When the ill fated fire consumed the building in 1998, the congregation banded together, more determined than ever, to rebuild.  All previous plans were revitalized we began to search for the location of a new home to worship in.  We utilized St. Francis Xavier Catholic Church until our building was completed.

June 1999 the construction began, but in August, a wind caused all of the trusses to fall and caused yet another setback in our schedule. 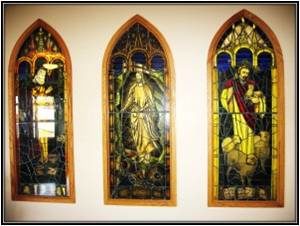 Our beautiful windows stood proudly in our building on Nanton Ave until the church burnt down.  The fire department was able to save these windows alongside a few key historic items from the sanctuary before the remainder of the building was lost to fire.  The windows were restored and are now on display in the front entrance to our  building on Ross street.