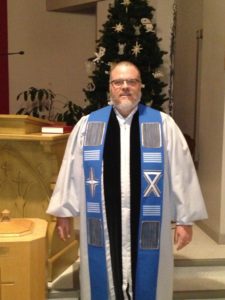 David, born in Ontario, is nonetheless an Albertan through and through.  Raised in Calgary, David attended the University of Calgary, graduating with a major in Religious Studies (Eastern Traditions), and a minor in Political Science.  Like his father thirty years prior David felt the call of God to serve in ministry in the Presbyterian Church in Canada, and was accepted at the Vancouver School of Theology in 1989.  Upon graduation he returned to Alberta to serve St. Paul’s Presbyterian Church, Eckville.  Later David received a call to serve another “St. Paul’s” Presbyterian Church, this time in Banff, where he served for an extended period of time.

A few years ago David initiated the process to transfer into the United Church, a lengthy, intensive process of discernment both for David and the UCC.  A more courageous move into “progressive” areas of social justice in the UCC held attraction for David and was the fundamental reason for his desired transfer.  During this period of study, prayer, and reflection, David served at Rundle Memorial United/Banff, McDougall United/Calgary, Knox United/Calgary, and Springbank United.  Recently David was received into the Order of Ministry in the UCC.  He is now blessed to be serving at Crossfield United.

David defines his approach to ministry as being traditional-progressive, a seemingly oxymoronic phrase but perhaps not.  In terms of worship and theology, he embraces the age-old tenets of the Christian religion, with Christ at the centre of God’s self-revealing action of redemption through the Cross and Resurrection.  David also affirms the inclusion of those often marginalized or left out of the Church’s expression of kingdom values.

“Rev. Dave’s usual office hours are  Tuesday-Thursday and Saturday  9:30 -5:30 but some days he may be away from the church for meetings or pastoral care visits. Still, to connect with Dave, feel free to drop in during the above hours, or Sunday mornings at worship (10 a.m.),  call him at the church (403-946-5514), or email him at minister.crossfield@gmail.com.”